Pseudobulbar affect (PBA), also called emotional lability, is a condition of uncontrollable laughing or crying without provocation that isn’t consistent with a patient’s emotional state. PBA is most often observed in patients with neurological disorders such as amyotrophic lateral sclerosis (ALS), multiple sclerosis, Parkinson’s disease, Alzheimer’s disease, brain tumors, or as a sequela of stroke. The management of this condition includes an FDA-approved drug combo of dextromethorphan and quinidine, or Nuedexta®, which has also been used off-label for controlling agitation or aggression in Alzheimer’s dementia patients. Nuedexta® comes with a hefty price tag (AWP is $26.70 per dose) and is only available as an oral capsule, presenting potential barriers to use in hospice given capitated reimbursement rates and drug administration challenges in patients with dysphagia.

Since treatment with Nuedexta® may be cost-prohibitive and dextromethorphan (DM) is readily available as an over-the-counter cough suppressant in a liquid formulation, some clinicians have inquired about alternative solutions.

The short answer is “no”. Delsym® is uniquely formulated as dextromethorphan encapsulated in an edible plastic (polistirex). This coating limits exposure of the parent molecule to stomach acids and leads to slower release and a longer duration of action compared to the immediate release formulation. Exposure to stomach acids gradually degrades the polistirex coating, exposing the underlying dextromethorphan, which is then quickly converted to a pharmacologically active metabolite with antitussive properties, dextrorphan. The parent molecule, dextromethorphan, is useful in PBA management (dextrorphan, the antitussive metabolite, is not).

Even though Delsym is formulated to extend the required time between doses, there is no increase in dextromethorphan’s area under the curve (AUC), an indicator of total drug exposure over time. In order to use dextromethorphan for PBA treatment we need quinidine, a CYP2D6 enzyme inhibitor, to prevent the metabolism of dextromethorphan to dextrorphan and increase its AUC. In other words, co-administration of quinidine is necessary to prolong systemic exposure of dextromethorphan and enhance its CNS effects which helps to control PBA symptoms. Even though quinidine tablets are commercially available, they’re only manufactured in 200mg and 300mg strengths (much higher than the 10mg dose found in a Nuedexta capsule), ruling out the co-administration of quinidine tablets and Delsym to achieve a similar effect. 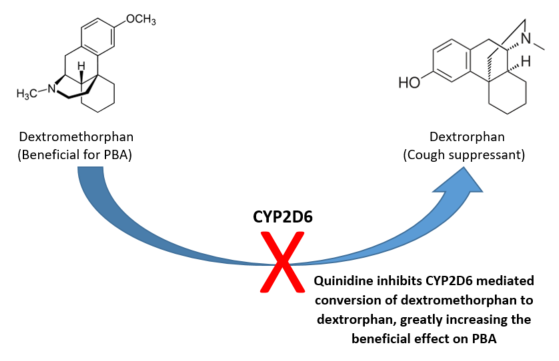 Can dextromethorphan and quinidine be compounded into an oral liquid formulation?

A literature search identified a case study of two hospice patients with PBA whose symptoms were controlled following administration of a compounded dextromethorphan/quinidine (DMQ) suspension. The suspension was prepared with one-200mg quinidine sulfate tablet crushed and mixed into 118ml of 15mg/5ml dextromethorphan oral solution. This solution was then mixed with USP cherry syrup liquid to yield a final concentration of 19.7mg dextromethorphan and 11.1mg quinidine in 10ml of suspension; this is roughly equivalent to the ratios found in one Nuedexta capsule (20mg DM/10mg quinidine). The suspension was administered twice daily, consistent with Nuedexta dosing. Patient #1 was transitioned from the commercially available capsule to the compounded suspension after presenting with dysphagia and did not experience a return of PBA symptoms. Patient #2 was diagnosed with PBA after a week of uncontrolled weeping. This patient was also having difficulty swallowing and their weeping was reduced to an acceptable level within one day of starting the compounded suspension. These findings are encouraging for hospice clinicians looking for creative ways to treat PBA and serve as a guide for OnePoint Patient Care to offer customized solutions in our shared mission to provide comfort at the end-of-life.