What are the differences between diltiazem dosage forms?

With seemingly innumerable generic variants among dosage forms, diltiazem undoubtedly causes more confusion than any other drug when it comes to generic substitutions. As of August 2022, the FDA Orange Book lists a whopping 117 active diltiazem formulation/strength/manufacturer combinations. So, how do prescribers and pharmacists sort this mess out?

Two key differences among the capsules are once vs. twice daily dosing and whether they can be opened to facilitate administration in patients with dysphagia or not. Nearly all bottles of diltiazem capsules will say on the label whether a product is intended for once or twice daily dosing (image 1). Only Tiazac, Taztia, and Tiadylt and their AB4 rated generics can be opened and sprinkled onto soft food per their product labeling. AB1 and AB3 rated products also have tiny beads inside (similar to the AB4 rated products), but the product labeling and manufacturer representatives don’t endorse the practice of opening these capsules (image 2). 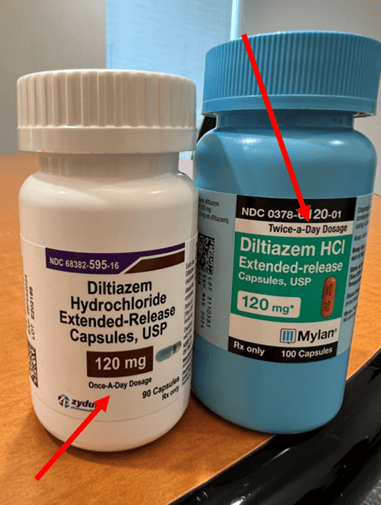 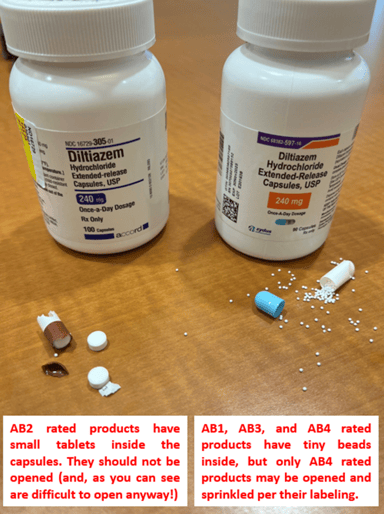 Drug costs are very similar among the capsules and there really aren’t material differences among indications, except that only once daily formulations are recommended for use in patients with vasoreactive pulmonary arterial hypertension. All forms are FDA approved for treatment of angina pectoris and hypertension and used off-label for atrial fibrillation/flutter, non-sustained ventricular tachycardia, premature ventricular beats, and supraventricular tachycardia. If there’s a preference for a certain formulation, it’s good practice for the prescriber to write the brand name on the prescription and note that generic substitution is permissible.

Who knows why there are so many different diltiazem ER capsules?? Hopefully this helps to clear up some of the inevitable confusion!

Joe Solien is the Vice President of Clinical Services at OnePoint Patient Care. He’s responsible for OnePoint’s national clinical services programs, including staff and partner education, formulary design and development, and medication utilization reviews. He began working for OnePoint as a pharmacy student intern in 2004 and became a staff pharmacist after graduation. In 2010, he was promoted to Clinical Pharmacist and has continued to serve on the clinical team in a number of roles since then. Joe earned a PharmD from Midwestern University – Glendale and is board certified in both psychiatric and geriatric pharmacy. He earned a BS in biochemistry and molecular biology and a BA in chemistry from the University of Minnesota – Duluth.

Melissa Corak is the Senior Clinical Pharmacist at OnePoint Patient Care, primarily supporting the needs of pharmacy staff and hospice partners in OnePoint’s Western Division. She has worked closely with the clinical team since joining OnePoint as a staff pharmacist in 2012 and transitioned to working with the team full-time in 2018. Melissa earned her PharmD from Midwestern University – Glendale and is board certified in geriatric pharmacy.